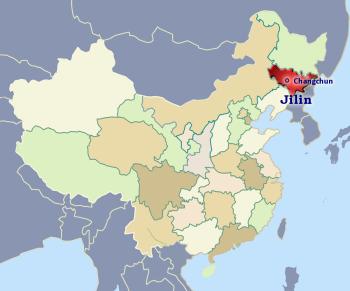 Jilin is part of ‘Manchuria’ the north-eastern region of China. The name ‘Jilin’ comes from the Manchu word for the Songhua river ‘Jilinwula’. It was part of the ancient Korean kingdom of Goguryeo ➚ before Jilin was conquered during the Chinese Han dynasty but was sparsely populated until the 19th century. Jilin reached its greatest geographical extent during Qing dynasty times, the lands east of the Wusuli (Ussuri) River on the north Pacific were under its control, including Hǎishēnwǎi (Vladivostok) and even Sakhalin island to the north of Japan. These lands were given up to Russia in the Amur Annexation ➚ (1858-60). Rapid industrial development began under the Japanese occupation when it was part of the kingdom of Manchuguo (Manchukuo WG) 1933-45.

Places to visit in Jilin

The famous Long March of the Communists started at Jinggangshan, Jiangxi where they were encircled by Nationalist forces. On 16th October 1934 about 100,000 troops attempted to break out, most died in the attempt. 36,000 began the Long March of 8,000 miles [12,875 kms] through mountainous Western China. This distance is equivalent to walking from New York to San Francisco and back. About 10,000 finally arrived on 22nd October 1935 at Yan'an Shaanxi.
Read more…

Changchun, Jilin's largest industrial city, is famous for its car and truck factories. It has the former palace of the last Qing emperor Puyi who was set up as Manchuguo's ruler and is now a museum; at this time Changchun (meaning Eternal Spring) was known as ‘Xinjing’ (New Capital). The Buddhist Banruo Temple stands to the north-east of the center. Some of the central and University buildings date from the Japanese occupation.

Jilin City to the east of Changchun is important for industry - three large chemical plants were built in 1949. It is also the site of the Wenmiao ➚ Confucian Temple. Beishan Park to the west of Jilin City has several temples. It has a notable Catholic church. Perhaps its most unusual attraction is a Meteorite Museum that houses fragments of a meteorite that fell in 1976, some fragments weigh 2 tons [1,814 kgs]. The ski resort at Songhua Lake attests to the cold winter weather in the province. It is also renowned for the frost covered trees which are produced when ice droplets form from the mist (called shugua) created by a nearby hydro-electric plant.

Relations between Korea and China

A history of the long and eventful history of Chinese relations with Korea. Chinese settlement first began two thousand years ago and at times since then China has intervened in Korean affairs, most recently in the Korean War 1950-53. Read more…

Ji'an on the Yalu River was the capital of the Korean Goguryeo kingdom and is now the border crossing into North Korea. There are tombs and other remains as evidence of the old Korean kingdom and ethnic Korean people predominate. The General's Tomb ➚ at Ji'an is a monument dating to the Han dynasty.

Lake Tian (Heavenly Lake) is a scenic spot in the far south. It is an old volcanic crater lake and straddles the border of Jilin with North Korea. The Longtan Deer farm ➚ is a popular tourist attraction nearby. Tianchi is within the Changbai (forever white) mountain range which has thick snow cover in winter. The mountainous terrain and forests are still home to snow leopards and tigers. This area produces considerable quantities of the medicinal herb ginseng.

The Song dynasty is a period of Chinese refinement and peace rather than military prowess. Great strides were taken in the creative arts and literature. Prosperity from the growing trade by sea rather than overland fueled the building of huge cities. The eventual conquest by the Mongol hordes brought the dynasty to a tragic close. Read more…

The mountainous south eastern region that borders North Korea is home to a high proportion of Korean ethnic people. Jilin province has a very cold winter climate but in the north-west lies a plain of rich agricultural land producing much corn and soy beans. It also has fine pasture for sheep and cattle. Around Tonghua in the south east the mountains provide ideal conditions for growing vines.

After re-organization in 1948 the Shenyang site was chosen for the North-eastern Administration College. It became Jilin University in 2000 after merging with other local higher education establishments. It covers all the main disciplines but is renowned for engineering subjects and natural sciences.. Undergraduates: 43024, Postgraduates: 24021, International students: 1272, GP World ranking 455