The Philippines and China 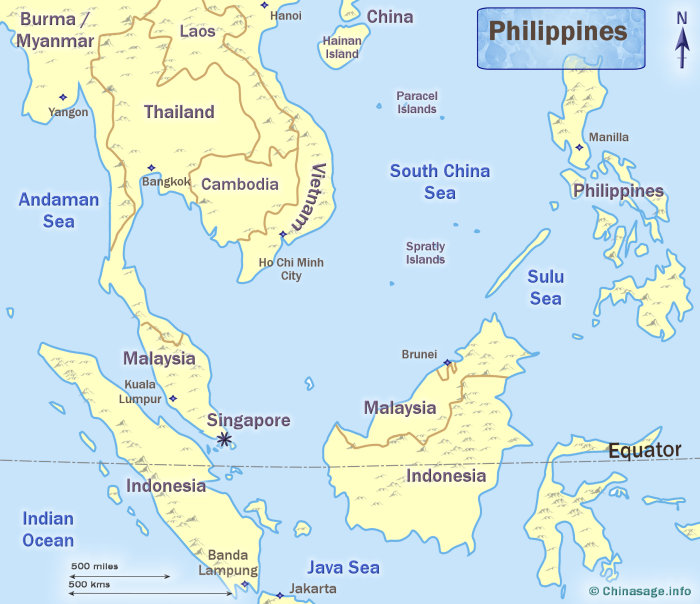 The Philippines archipelago is a rather strange entity and has had a long history with its large neighbor over the sea to the north-west: China. After 1899 the Philippines has been dominated by the US and this has led to Christianity and English being significant influences despite its geographic position within 300 miles [483 kms] of the Chinese coast. There are many small but some large islands among the total of 7,000 that make up the archipelago, of these Luzon is the northernmost, largest and closest to China. These islands form part of the volcanic rim of the Pacific ocean, a continuous chain running to Taiwan, and are relatively recent in origin and are still subject to eruptions. They are mountainous which requires agriculture and settlement to be restricted restricted mainly to the lowland coasts.

The city of Port Arthur now a part of Dalian at the tip of the Liaodong peninsular, played a significant part in the interplay between foreign powers in the late 19th century. It was called Port Arthur by the British and its strategic position commanding the sea routes into Tianjin and the Manchurian provinces made it a prized position. In the Battle of Port Arthur Japan and Russia fought each other for control (1904-5) and Japan became the victors with control over the port and the whole province. At the defeat of Japan in World War 2 it was leased to Russia 1945-54.
Read more…

It remains a relatively poor country with agriculture the main industry. The climate is broadly humid tropical with temperatures always above 68 ° F [20 ° C] with typically 120 inches [305 cms] of rain. The total population is around 110.8 million (2021). The earliest settlers were from the Malay peninsular and these still form small indigenous tribes of the rainforest interior with their own disparate languages. Later on, in the Iron Age settlers came from Vietnam and southern China. With the rise of Islam around 1400 the islands came under the control of Java. Luzon, at the same time came under Chinese control and paid tribute to China as a vassal state in 1372 until about 1450. Many of the immigrants came from southern China and many still speak the Hokkien dialect. The Chinese Filipinos now number about 1.5% of the population but are on average richer than other ethnic groups and live mainly on the island of Luzon. 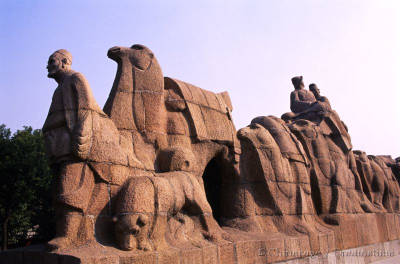 The colonial heritage is however Spanish rather than American. The Spanish came along in 1521 after Magellan's voyages of exploration and it later came to be named after King Philip II of Spain ➚. It was in 1565 that it was developed as a trading port for the blossoming trade across the Pacific from China and West Indies to Acapulco, Mexico. According to the Treaty of Tordesillas 1524 which split the world between Spain and Portugal, the Philippines should have been put under Portuguese rather than Spanish control but at the time Portugal did not see any advantage of contesting Spain's occupation. Later on in 1750 at the Treaty of Madrid Portugal formally acknowledged Spanish sovereignty. There followed a golden age of Spanish galleons carrying Chinese and other goods to Mexico (their half of the globe) earning the sea captains a handsome profit.

Chinese ships brought goods from ports along the Guangdong and Fujian coasts to Manilla where they were sold and carried over the Pacific on Spanish ships. At this time the islands were administered as part of Mexico. Despite local opposition the Catholic faith was imposed on the islanders and some of the early Chinese migrants converted but influence was really restricted to those engaged in trade. In the 1580s the strong Catholic hatred of homosexual activity led to the execution of two Chinese men (burned at the stake), much to the dismay of the mainland Chinese where such activity was at the time quite acceptable. In 1603, when efforts to quell a rebellion over financial and missionary disputes got out of hand a massacre of around 20,000 Chinese living in Manila took place. There had also been rumors that suggested the Ming government might invade their former tributary of the islands to retake control. After this massacre many Chinese decided they were safer under the Portuguese and moved to Macau.

A substantial colony of Chinese merchants grew up again in the capital Manila on Luzon island in the 18th century. The Chinese government were happy to have a port outside their territory as it minimized contact with Europeans. Imports from Mexico of silver bought quality silks, tea, porcelain and rhubarb. Christian missionaries used the islands as a base for planning missions into China. When China blocked direct trade with Japan it was Manila and Macau that acted as intermediaries in this lucrative trade.

With the collapse of Spanish power it was the Americans who took over as colonial masters in 1899 following a rebellion against Spanish rule. At the time there was heavy anti-Chinese sentiment in America with a ban on Chinese immigration, this ban was extended to the Philippines and Hawai'i. The Americans introduced religious freedom, state education and English as the primary language. Gradual independence was instigated in 1932 but the Japanese occupation 1942-45 interrupted the transition to formal independence until July 1946.

The two official languages on the islands are now Filipino and English. English is the language for government and record (newspapers etc.) but the primary language in schools is Filipino. The Filipino language is derived mainly from the indigenous Tagalog language but with some elements from English, Spanish, Malay and Chinese. 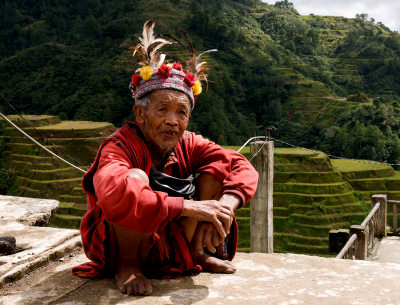 At the moment there is a gradual shift to more independence from the US and friendship with China. The vast Clark US air base ➚ on Luzon, although transferred in 1993 to Philippine control, continues as a US military presence and it is from here that the US patrol the disputed waters of the South China Sea. It was the largest overseas airbase in 1990 and had up to 15,000 people but has now declined somewhat. The Philippines have accepted aid in agriculture and fisheries from China in recent years. There have been joint military exercises with China and although offered funding from the Belt and Road initiative this has not yet yielded any formal agreement. In the main Filipinos continue to have more trust of the US than China. The country remains one of the few places where both China and US are rivals actively promoting good relations for their own strategic interest. 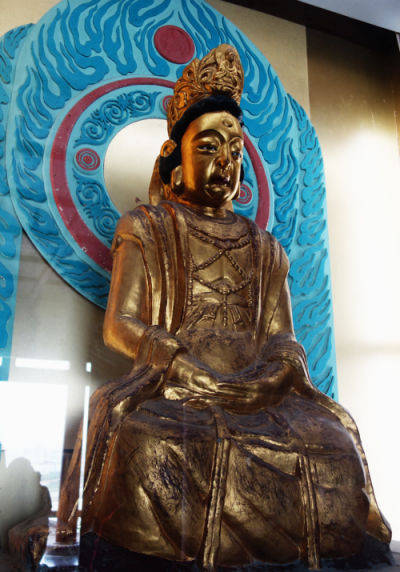 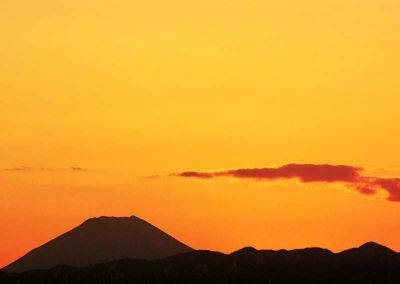 History of the often difficult relations between China and Japan. The Japanese occupation of China 1937-45 and continued U.S. support for Japan has continued the frictions between the two neighbors. 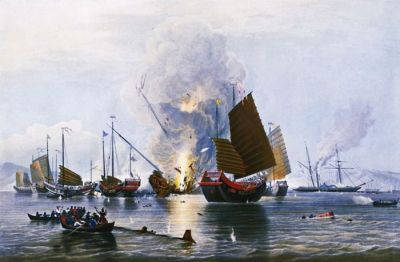 China was exploited by foreign powers from about 1840 until the foundation of the PRC in 1949. The establishment of foreign enclaves within most Chinese cities led to many frictions with the foreign powers, particularly Britain. The treaty port system forcibly opened up cities to foreign trade with foreigners living under their own laws although on Chinese soil.
Please wait...
Downloading information about character