A stele is any sort of inscribed stone (for example gravestones). [The plural can be written as stelae or stelai as well as steles]. A stele is the general term used for inscribed stones all over the world. In China the inscription is called a 碑铭 bēi míng or 碑文 bēi wén.

Forest of Steles (museum in Xi'an). Image by 蒋亦炯 available under a Creative Commons License ➚

Many Chinese steles were produced over the centuries as extremely durable copies of writing. The oldest known is the ‘Ten Stone Drums’ 十石鼓 Shí shí gǔ) in Shaanxi from the Spring and Autumn Period 2,500 years ago. Emperor Qin Shihuangdi of the following Qin dynasty erected steles in the new Qin unified script at several places including at Mount Taishan, Shandong. 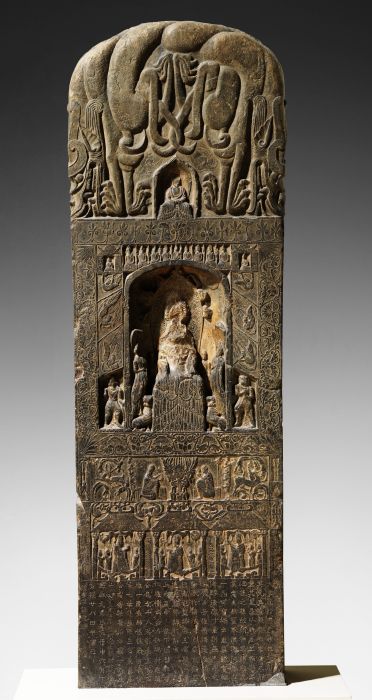 Stele Commissioned by Li Zhewang 李真王, Yao Langzi 姚郎字, and other members of a devotional society. Steles of this type were common in the early sixth century. The dedicatory inscription on the base dates the work to the sixth month of the year 528 and indicates that it was commissioned by a group of seventy individuals on behalf of the emperor, the country, and various ancestors. As was customary, symbolic portraits of these patrons, arranged hierarchically, can be seen on the front, sides, and back of the stele. Image by Metropolitan museum of Art ➚ available under a Creative Commons License ➚ 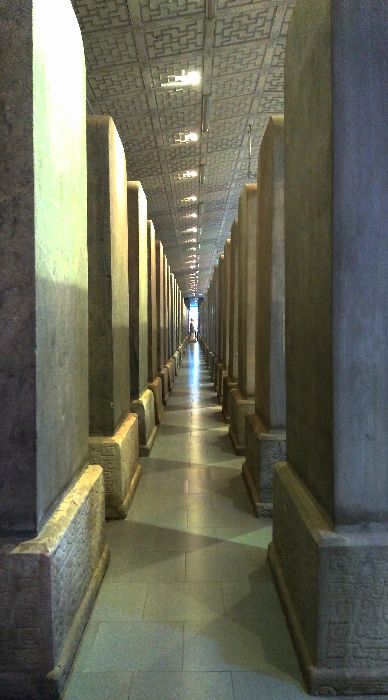 The complete text of the Chinese Classics was engraved into large numbers of stones on several occasions from the Han period (熹平石经 Xī píng shí jīng) onwards (175 , 837, 1177 and 1793) so that scholars had access to these essential writings before books became widespread. The engravings made in 837 are still mainly intact as the ‘Forest of steles’ (碑林 bēi lín) at Xi'an. The museum has over 1,000 steles among which the classics only take up 114 steles (about 560,000 characters) and represent the most complete copy of the classics ever to have existed. Also at the Xi'an museum is the large ‘Classic of Filial Piety’ inscribing the calligraphy of Tang Emperor Xuanzong. In another hall there is an inscribed detailed map of Chang'an at the peak of its power and size in the Tang dynasty.

The most prestigious academic institution, the Hanlin Academy, Beijing collected many historic steles and many of these survived the burning down of the academy in 1900 and can still be seen in the Confucius Temple, Beijing. Here also is an inscribed list of all the top students of the Imperial Examinations over the centuries.

Not all steles were inscribed with text, a star map dating to 1193 is an example of a stele used as a diagram rather than writing. The map was engraved in 1247 and can still be seen at a Confucian temple at Suzhou. It names 1,565 individual stars and shows the path of the moon and sun through the constellations.

A great increase in the number of steles occurred when Buddhism reached China (c. 600CE) as many Buddhist scriptures were inscribed on steles in the Chinese style together with carved images.

The top of the Nestorian stele in the Beilin Museum in Xi'an, China. Image by David Castor ➚ available under a Creative Commons License ➚

Other religions created steles to proclaim scripture. One of the most famous steles was found at Chang'an in 1625. It was written in both Chinese and Syriac and documents the arrival of Nestorian Christianity into China over 150 years. The monk Alopen arrived in 635 and the stele documents the church's early history - then called ‘Da Qin Luminous Religion’ (Da Qin was the term for the Byzantine Roman Empire).

However the most common use of steles was as as memorials (记碑 jì bēi) that document the life and achievements of the deceased. Empress Wu Zetian famously asked that her memorial stele should have no inscription as she said her accomplishments would speak for themselves. This, however, did not stop succeeding dynasties adding 13 inscriptions. Many memorial steles are flat blocks of stone set into the back of a bixi (a mythical tortoise-like creature).

Other steles commemorate historical events rather than people such as disasters that took place near where the stone is placed.

In 219 BCE, on the first of many inspection tours of his vast empire, the First Emperor of Qin visited Mount Yi. He ordered that a stele be erected there, and calligraphed with a text in the newly standardized script. The text praises the emperor for bringing peace to the world by defeating Qin's six rival states and unifying them under his rule. Although the stele was destroyed by fire during the Tang dynasty (618-907), the inscription was passed down by scholars; the present rubbings were taken from a stele that dates from the tenth century A.D. While the calligraphic style is of that era, the balanced structure and relatively uniform size of the characters derive from the seal script established by the Qin, echoing the glorious tradition of this mighty but short-lived state. Image by Metropolitan Musuem ➚ available under a Creative Commons License ➚

Another important use of steles was as an artwork to permanently capture the style of renowned calligraphers. This tradition began in the Song dynasty. The intention was to allow students and scholars to not just read the inscription but take away a faithful copy of the style. This can be considered an early form of book printing. Students could then learn how to copy the style of calligraphy. A copy was made by taking a rubbing - paper was placed on the stone and then rubbed with black wax or tamped with a bag of black ink.

Stelae were also erected at famous scenic sites, particularly sacred mountains where they were inscribed with poems describing the poet’s admiration of the scenery. The Frenchman Victor Segalen ➚ [1878-1919] visited and copied the inscriptions on many steles in 1909-17. He published a book of poems entitled ‘Stèles ➚’ in 1914 drawing on Chinese poems from throughout Chinese history.

Here is an example poem from his collection, translated from the French by Billings and Bush.

To honor renowned Sages; to enumerate the Just; to repeat on all sides that such a man lived, and was noble, and his countenance virtuous,
All that is good. All that is not my concern: so many mouths discourse of that!
So many elegant brushes apply themselves to replicate formulae and forms
That the memorial tablets pair off like watchtowers along the Imperial Way, five thousand paces upon five thousand paces.

The discovery of a huge number of 'oracle bones' has greatly added to the knowledge of the origins of China's written script. It pushes back the written language to at least 3,500 years ago. Careful study of the inscriptions is still revealing information about life in the Shang dynasty.