The Song dynasty is a period of Chinese refinement and peace rather than military prowess. Great strides were taken in the creative arts and literature. Prosperity from the growing trade by sea rather than overland fueled the building of huge cities. The eventual conquest by the Mongol hordes brought the dynasty to a tragic close. Read more…

The Qin dynasty, although short-lived, is arguably the most important as it created so much of what now defines 'China'.

Indeed it is even believed the Western name ‘China’ may derive from ‘Qin kingdom’. Before the Qin dynasty there had been seven kingdoms clustered around the Yellow and Yangzi Rivers. These kingdoms were engaged in incessant mutual attrition during the Warring States period until one of them, ‘Qin’, proved dominant. The Qin kingdom was on the western edge of China and needed an efficient cavalry to repulse raids by the nomadic people on its borders and these military skills proved decisive. The Qin were considered so close to barbarism that their representatives did not attend meetings with the other six warring states. It may also have been the first of the kingdoms to master the use of iron weaponry giving it an advantage over those still using bronze. They fought from horseback and not from cumbersome, unwieldy chariots like the other states.

Teacup media audio podcast by Laszlo Montgomery.
The Rise and Fall of the Qin

Through dictatorial (Legalist) rule, the first Qin emperor defeated all the other kingdoms and formed for the first time a Chinese nation state under one ruler, inventing the concept of ‘Emperor of China’. Although the term 'dynasties' is used for the preceding periods it was only under the Qin that the state was centrally controlled under one person, previously it had been a case of loose association with a local ruler having autonomy. The Qin state was an efficient military machine and pursued a policy of subjugation of ‘all under heaven’. It was brought in as a fervent revolution, not just a change of leadership. By conquests as far south as Guangdong, Qin Shihuangdi created the rough boundary of the country of China that has stood to the present day. The Great Wall of China was built to define China's northern limit by joining and strengthening existing border walls. Other major construction projects included his capital city; his mausoleum and a network of roads, canals and irrigation systems. Control of water supply enabled agricultural production to increase; providing food for the burgeoning empire.

Chinese New Year is on Tuesday 1st February 2022, a year of the Tiger. Give our very difficult Chinese New Year quiz a try. The Winter Olympics ➚ come to Beijing on 4th February. It will make Beijing the first city to have held both Winter and Summer Olympic Games.

We have a full set of calendars showing all the public holidays and festivals in 2022 and now 2023 as well.

As well as bringing in unified systems for weights; measures and roads, during the Qin dynasty he imposed a single set of Chinese characters for writing based on the Qin script. The Qin kingdom had conquered many other kingdoms with higher populations and with their own writing scripts; to be able to administer these new people everything had to be standardized. The standardization of weights was important because tax was collected in goods rather than money. His transport reforms enabled the creation of a network of roads radiating from the capital near Xi'an with a standard length of axle allowing the transport of goods over long distances. (Deep ruts in the road created by carts allowed only those with a matching axle width to travel easily). The new roads had three lanes, the central one was reserved solely for Imperial use. However, this road network amounting to 4,250 miles, proved counter-productive as it enabled rebels to quickly flee a pursuing army. The use of the brush for both writing and painting was introduced; superseding the stylus previously used to impress writing into clay or to inscribe on stone.

Qin Shihuangdi moved the country away from a slave to a feudal system. He disbanded the many militia that had been the means of maintaining the earlier state of incessant warfare. The creation of a complete set of unambiguous laws for the first time codified rights and responsibilities. Arbitrary punishment was abolished. A key reform of the Qin Dynasty was the division of government into three separate functions : administration; military and supervision of the administration. The later function included the appointment of officials and the keeping of records, it checked that the administration carried out the orders it was given. This division made the empire less likely to break apart, as no one person held both the administrative and military power needed to mount a revolt against the Emperor. An administrator was appointed directly by the emperor from a distant area so he would have no loyal, local power-base to exploit. 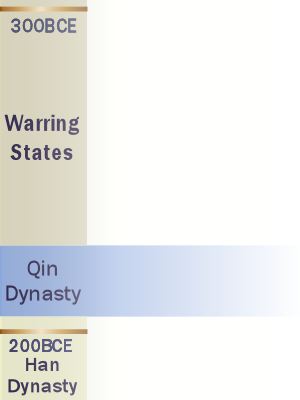 Bats are commonly used in handicrafts, paintings and artwork to give a wish for good luck. This is because 'bat' and 'good luck' sound the same in Chinese. Read more…

The Qin dynasty was effectively a one man 'dynasty' lasting only 25 years as his successor failed to keep the country united. Qin Shihuangdi's chief Minister Li Si ➚, the architect of many of the reforms, tried to cling to power by controlling the succession. The Crown Prince, who had voiced dissent over the reforms, was tricked into committing suicide by way of a forged order sent by Li Si purporting to be from his father. So it was Shihuangdi's second son, who reigned under the title ‘Er Shi’ literally ‘Second Emperor' (229 - 207 BCE) on Qin Shihuangdi's death. A weak and dissolute man, his rule lasted just three years, he gave power to his chief eunuch Zhao Gao who turned the capital into a bloodbath with Li Si amongst his many victims. The people had had enough of enforced slave labor, crippling taxation, brutal treatment and so the centralized system of control broke down. The reaction to the dissent was to act with even greater brutality. Zhao Gao seized power and forced Er Shi to commit suicide in 207BCE supplanting him with Er Shi's young nephew, but by then it was too late as the Qin Empire had already fallen apart. 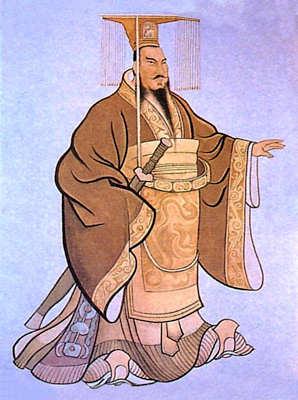 The First Qin Emperor of China

Qin Shihuangdi is the first historical figure of great significance in China. Despite the distant date, many of his initiatives still remain in place today. His chief achievement was the first unification of China under one man. At the age of 13 he became king of the Qin (the western-most kingdom of the Warring States) and inherited his father's zeal for conquest.

King Zheng was a dictatorial and harsh ruler following the Legalist philosophy. Broadly speaking the Legalist scheme raised the Emperor above all others, who are deemed prone to evil, he ruled absolutely and all had to obey his commands, they had no rights other than those he gave them. He mobilized the people of Qin into forced labor for his many projects and in 11 years had swallowed up the other states of the former Zhou empire to form the 'nation' of China for the first time. To keep the peace he held hostages from the defeated royal families and melted down the bronze weapons of all the armies into huge bells and statues. By relocating the feudal lords and kings he broke their power and imposed direct Imperial rule in its place. Even surrendering to him was no guarantee of survival, more than a million opponents died in his ruthless conquests. During the Qin dynasty he re-engineered the existing walls defending individual kingdoms into one Great Wall for the whole nation. He sought to wipe out history by burning any books that conflicted with his Legalist philosophy including those of Confucius. His approach was to start a new system from scratch, ignoring all that had gone before. To even mention historical events in conversation was a serious offense. However it must be said that some of these allegations made in the succeeding dynasties, with some vindictiveness, are not backed up by hard facts. When the Qin dynasty fell, the vast Imperial library was burned to the ground doing far more destruction to literature than Qin Shihuangdi ever did. The fragments of books that escaped burning proved a rich area of study for subsequent scholars who tried to piece together the originals. He standardized weights, measures, roads, and the Chinese script. The long history of the written Chinese language had created dozens of different ways of writing each character, the Emperor ordered his minister Li Si to bring in standardization. To ensure adoption of the new standard script, books written using the old scripts were burnt. The dictionary by Xu Shen 许慎 called the Shuo wen jie zi 说文解字 documents the changes to the script.

智者千虑必有一失
Zhì zhě qiān lǜ bì yǒu yī shī
Even the wise can be occasionally wrong
One small mistake does not discredit a wise person.
All about Chinese proverbs

Qin Shihuangdi's huge new capital at Xianyang, Shaanxi had wide roads radiating out in all directions. At times 15% of the population was conscripted into his great construction projects: the Great Wall; his capital Xianyang and his Imperial tomb.

The imperial name Qin Shihuangdi means the first august emperor of the Qin. The use of the character for august deliberately echoes the similarly sounding 黄 huáng which links him to the legendary founding Yellow Emperor.

Video not visible
Kim Dramer's short video about the Emperor

Qin Shihuangdi was hard working with an eye for detail. He was paranoid about possible assassination plots. His workload was measured in weight of books (at that time not on paper but on bamboo strips) he could process in a day. Late in life he became obsessed with seeking immortality and the after-life, building the famous Terracotta Army to guard his tomb. The cruelty; forced labor; high taxes and upheavals eroded public support and on his death the dynasty quickly fell apart. However, many of his wiser reforms were retained by the succeeding Han and later dynasties.

The ambivalent view of Qin Shihuangdi as brutal tyrant or unifier is brought home in the epic film ‘Hero ➚’ by Yimou Zhang.

The Chinese reaction to the Versailles Treaty was the major turning point in modern Chinese history. Widespread student protests throughout the country led to a change in government policy and a refusal to sign the treaty. It was a nationalist movement calling for solidarity against foreign exploitation that was eventually to lead to a militarized Guomindang as well as the foundation of the Chinese Communist Party.

Let's get you started with a few simple sentences and phrases in both spoken and written Chinese. We begin with key concepts and introduces the most common and useful words and phrases in Chinese.
Please wait...
Downloading information about character