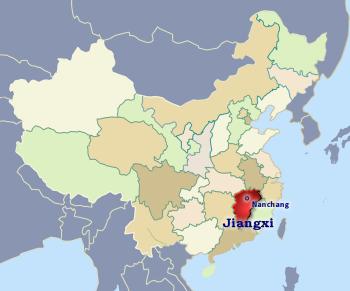 Jiangxi is an inland province in southern China. The river basin of the Gan Jiang 赣江 that flows north to the Yangzi defines its borders; the province's shortened name is ‘Gan’ after the river. It has a mountainous perimeter except for the flat land from Nanchang north towards the Yangzi River

Places to visit in Jiangxi

Nanchang is an old center, dating at least to the Han dynasty when it was known as Yuzhang. When the porcelain trade took off at nearby Jingdezhen it became involved in transportation and storage. Nanchang has an art gallery dedicated by to the works of Bada Shanren ➚ - a famous Ming dynasty artist and calligrapher.

One of the best known and oldest pavilions (Tang dynasty) in southern China is the Tengwang Pavilion ➚ at Nanchang it was rebuilt in 1989 on the site of the original building from 653 in the Southern Song style. To the north, Jiujiang set on the Yangzi, was an important port for transport right out to the sea (including tea; rice and porcelain) and it is now a modern city on a busy railway route.

It's the time of the grueling university entrance examinations 高考 gāo kǎo that are vital for future careers. There has been a tradition of mothers wearing a traditional silk dress 旗袍 qí páo to bring luck. Now some fathers and brothers have taken to wear the dress to bring luck and also lighten the serious mood. The origin is partly from the similar sounding proverb/idiom 旗开得胜 qí kāi dé shèng which means 'Success at first attempt' that has for centuries been associated with good wishes for examination success.

Poyang Lake is the largest freshwater lake in China, and like Dongting Lake in Hunan acts as a buffer for the Yangzi when it is swollen with summer rain. The warm waters are home to many fish.

Lushan is a particularly picturesque mountain close to the lake and is a draw for Chinese and foreign tourists. The mountain's buildings include some of European architecture that dates back to colonial days when the coolness and beauty of this mountain was appreciated by foreign visitors. Often shrouded in mists, Lushan, is located to the west of Poyang Lake and soars to 4,836 feet [1,474 meters]. It offers a respite from summer heat, even on its lower slopes. The town of Guling marks the transition to cooler temperatures (by 50 ° F [10 ° C]). It is often shrouded in cloud as moist air condenses into clouds and mist. There are religious buildings of all faiths: Buddhist, Daoist, Muslim and Christian. Many visitors aim to be at the peak at sunrise as that is when it is most likely to be clearest with spectacular views over the lake.

Dragon's Head Cliff ➚ is Lushan's most famous viewpoint. The Tang poet Li Bai wrote eloquently about the waterfalls ➚ on the mountain. The poet Bai Juyi wrote of the ‘peach blossom path’ to the summit because the peaches were in bloom a good deal later than lower down the mountain. It has Three Treasure Trees 三宝树 sān bǎo shù which are said to have been planted 800 years ago. There is also a fine botanical garden with alpine plants and medicinal herbs. Closer to modern times Chiang Kaishek had a house here (The Meilu Villa ➚ named after his wife); and in 1959, a pivotal meeting in the early days of the Peoples Republic took place when Peng Dehuai criticized the leadership over the failings of the Great Leap Forward. In 1970 another important political meeting ended the career of Lin Biao.There is amuseum - the ‘People's Hall Museum’ that commemorates these events.

Together with tea and silk, porcelain from China is its most famous export. Prized the world over, high quality porcelain commands high prices at auction. Like silk the secret of its manufacture was a closely guarded secret for centuries. Read more…

Jing de zhen is world famous for the huge amount of porcelain ➚ that it has produced since the Southern Song dynasty. The potteries and 500 kilns use local kaolin (china clay) to fire fine translucent white porcelain. Originally most of the output went to the Imperial court but during the Ming increasing quantities went to Guangdong for export. There is now a large interactive museum in an old Ming building to explain the whole production process. Another center of pottery manufacture was Ji'an now abandoned but it has the old Jiangren Deng pagoda dating to 1062 of seven levels.

Other places to visit in Jiangxi include: Mount Longhu ➚ (龙虎山) is a scenic spot venerated by Daoists. Sanqing shan ➚ near Shangrao is a UNESCO protected mountain range. Poyang Hu in the north is the largest freshwater lake in China and is linked to the Yangzi. It acts as a buffer to be filled with the summer surge of water that would otherwise flood the lands further downstream.

Mount Wuyi in the south-east is rugged mountain range along the border with Fujian province. The mountains have subtropical forests and many caves. The area was the center of the Minyue kingdom 2,000 years ago. Many of the leading figures of the Neo-Confucian movement from the Song dynasty lived in this area.

Jiangxi is well known for its role in the Communist Party history. Mao Zedong and other leaders became hemmed in on Jiangxi's rugged Jinggang Mountains ➚. Threatened by yet another Nationalist extermination campaign, the Red Army broke out on 16th October 1934 and began the Long March (长征) through hazardous mountains all the way to Yan'an in Shaanxi (a distance of 6,000 miles [9,656 kms]) of the roughly 60,000 who started the march, only 7,000 reached their destination. Ciping is a good center for exploring the majestic scenery and China's revolutionary past.

一个和尚挑水喝,两个和尚抬水喝,三个和尚没水喝
Yī gè hé shang tiāo shuǐ hē, liǎng gè hé shang tái shuǐ hē, sān ge hé shang méi shuǐ hē
One monk shoulders water by himself; two can still share the labor between them. When it comes to three, they all go thirsty.
Sometimes work is best done alone, a group may procrastinate without achieving anything.
Roughly equivalent to: Too many cooks spoil the broth.
All about Chinese proverbs

From the 8th century onwards there is a long history of silver mining and tea production in the province. When China opened up to foreign trade at Guangzhou, Jiangxi was on the overland route to Guangdong. Boats were able to use the Gan river all the way up to close to the border at Dayu when all goods were transferred to armies of porters who then carried over narrow passes to Nanxiong and the Bei River. This was particularly important for the transport of vast amounts of porcelain (china) produced at Jingdezhen for export to Europe. This trade dwindled in the late Qing when foreign countries set up steamer transport ships on the Yangzi.

Later on, in 1927 during the Republican period Zhou Enlai led a daring communist uprising in Nanchang. In 1969 Deng Xiaoping was exiled to Xinjian and worked there in a tractor factory. In the last thirty or so years the northern part of Jiangxi province has now become heavily industrialized even though it also has the best agricultural land. The southern part is more mountainous and continues to suffer from poor transport links.

As part of southern China, Jiangxi has hot, wet summers and short cool winters, making Jiangxi ideal for rice cultivation. At one time 70% of the agricultural land was in rice production. Tea is produced in great quantities too; Yunwu tea is produced at Lushan; Black tea at Ningzhou and Green tea at Wuyuan. Bamboo is another important crop.

As in so many other cultural areas the Chinese musical heritage is immensely rich. A wide range of different musical instruments have been developed over thousands of years. Accomplishment with a musical instrument is still considered an important part of a child's education.