Lunar month: 3 ; Host or Controlling line : 4
For all about the history of the I Ching / Yi Jing click here and for a description of the methods of divination click here. To get your own reading of the Yi Jing online click here. For a guide to what all this means click:
Show Key
豫: 利建侯,行师. Yù: lì jiàn hóu, xíng shī.

Yu indicates that, (in the state which it implies), feudal princes may be set up, and the hosts put in motion, with advantage.

In Yu we see the strong (line) responded to by all the others, and the will (of him whom it represents) being carried out; and (also) docile obedience employing movement (for its purposes). (From these things comes) Yu (the Condition of harmony and satisfaction). In this condition we have docile obedience employing movement (for its purposes), and therefore it is so as between heaven and earth; - how much more will it be so (among men) in 'the setting up of feudal princes and putting the hosts in motion!' Heaven and earth show that docile obedience in connection with movement, and hence the sun and moon make no error (in time), and the four seasons do not deviate (from their order). The sages show such docile obedience in connection with their movements, and hence their punishments and penalties are entirely just, and the people acknowledge it by their submission. Great indeed are the time and significance indicated in Yu!

(The trigrams for) the earth and thunder issuing from it with its crashing noise form Yu. The ancient kings, in accordance with this, composed their music and did honor to virtue, presenting it especially and most grandly to God, when they associated with Him (at the service) their highest ancestor and their father.

The first ‘six’, divided, shows its subject proclaiming his pleasure and satisfaction. There will be evil.

'The (subject of the) first ‘six’ proclaims his pleasure and satisfaction:' - there will be evil; his wishes have been satisfied to overflowing.

The second ‘six’, divided, shows one who is firm as a rock. (He sees a thing) without waiting till it has come to pass; with his firm correctness there will be good fortune.

'(He sees a thing) without waiting till it has come to pass; with his firm correctness there will be good fortune:' - this is shown by the central and correct position (of the line).

The governance of modern China

Governing 1,400 million people is no mean feat. China's structure of government is a power pyramid with the President at its head. In theory the people elect representatives who decide policy, in practice the ruling elite are rarely challenged by the democratic process. However the strong military involvement in government has been on the wane for over 25 years. Read more…

The third ‘six’, divided, shows one looking up (for favors), while he indulges the feeling of pleasure and satisfaction. If he would understand!--If he be late in doing so, there will indeed be occasion for repentance.

'He looks up (for favors), while he indulges the feeling of satisfaction; there will be occasion for repentance:' - this is intimated by the position not being the appropriate one.

The fourth ‘nine’, undivided, shows him from whom the harmony and satisfaction come. Great is the success which he obtains. Let him not allow suspicions to enter his mind, and thus friends will gather around him.

'From him the harmony and satisfaction come; great is the success which he obtains:' - his aims take effect on a grand scale.

The fifth ‘six’, divided, shows one with a chronic complaint, but who lives on without dying.

'(The subject of) the fifth ‘six’ has a chronic complaint:' - this is shown by his being mounted on the strong (line). 'He still lives on without dying:' - he is in the central position, (and its memories of the past) have not yet perished.

The topmost ‘six’, divided, shows its subject with darkened mind devoted to the pleasure and satisfaction (of the time); but if he change his course even when (it may be considered as) completed, there will be no error.

'With darkened mind devoted to the harmony and satisfaction (of the time),' as shown in the topmost (line): - how can one in such a condition continue long? 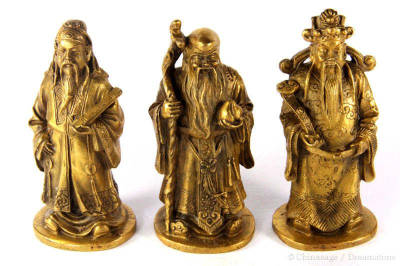 You will often see the character for good fortune 褔 fú on decorations and gifts. 'Fu' is also associated with bats and oranges and this has an interesting explanation... Read more…
This translation of the YiJing classic text uses the original Chinese including the 象传 Xiàng zhuàn commentary converted to modern simplified characters and pinyin. The English translation is based on William Legge (1899) ➚ which is now out of copyright. We have changed some wording and converted to American spelling. We hope to replace this with a more modern translation. 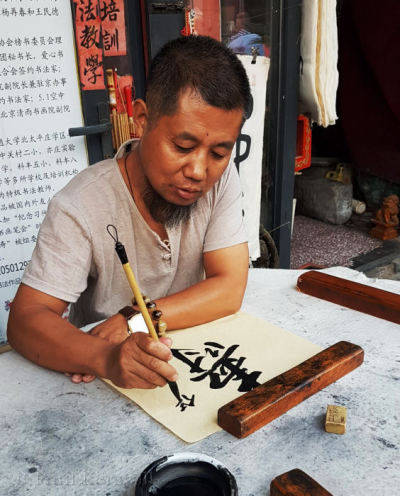