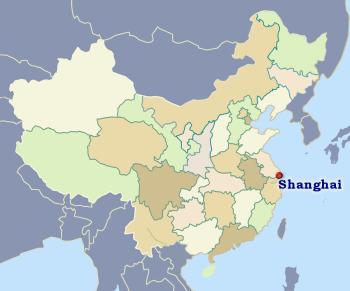 多行不义必自毙
Duō xíng bù yì bì zì bì
Persisting in evil leads to self-destruction
Turning to bad deeds will ultimately bring ruin. This is a form of Karma - divine justice which catch up with you one day.
All about Chinese proverbs

Shanghai has a healthy rivalry with Beijing in the competition to be China's leading city. By population and trade it certainly wins the contest. For a country as old as China, Shanghai's importance has been precocious, it does not have the heritage of other ancient cities. As Shanghai is situated astride the Huangpu River ➚, close to Yangzi River's outflow to the sea, it is ideally situated to control the river trade into central China and quickly developed from a small Zhejiang fishing town in the 1840s (population 50,000) to be the huge metropolis it is today. It is one of the five municipal divisions of China with equal standing to provinces and considered China's most cosmopolitan city.

Places to visit in Shanghai

The Bund area of Shanghai (Zhongshan East Road) has a mix of houses of 'European' architecture of the early 20th century. There are few truly ancient sights to see in Shanghai. However, Shanghai Museum holds one of the finest collections of artifacts in the country.

The ‘Old Chinese City’ is further south from the Bund and has the narrow alleys, temples and markets typical of an old Chinese town. It has the famous traditional ‘Yu Gardens’ which were built in 1537 in Ming dynasty style. The Huxingting Teahouse stands in the middle of the gardens with its famous zig-zag bridge over a pool. This was made to deny access to demons as, according to feng shui they only travel in straight lines. The main shopping streets are north of the old city and run east-west - Nanjing Road and Huaihai Road.

The former racecourse used by colonialists has been turned into the People's Park. A Buddhist Jufo Temple ➚ (Jade Buddha) built in the traditional style is of modern date. Jing'an Temple is another fine Buddhist building. Hongkou Park is a green area hidden among all the buildings, in the grounds is the grave of the great modern writer Lu Xun. A modest hill on the north-west edge of the city, She Shan 328 feet [100 meters] high, is the site of a large Catholic church built 1925-35. Shanghai is divided by the Huangpu River, Puxi is the district to the west and Pudong to the east. The Pudong district which was formerly a bit of a slum was opened for industrial development in 1999 and has grown very rapidly; its most famous landmark is the emblematic Oriental Pearl TV Tower ➚ which offers stunning views over the whole city.

Early development was initiated by an influx of foreign investment after the Opium Wars when Shanghai became a treaty port. It was developed at first by the British, and up until 1940 was known colloquially as ‘Britain’s front door to China’, the Hong Kong and Shanghai Bank (HSBC) founded by the Scotsman Sir Thomas Sutherland ➚ dominated early investment into China. Investors used the city's strategic position near the mouth of the Yangzi to develop the whole valley, far away from the Qing dynasty control imposed at Guangzhou and Beijing. It became China's first ‘modern’ city serving as both an example and a warning about modern urban development. At its heart were the International and French concessions - areas subject to foreign not Chinese law.

The city has always been important politically, Sun Yatsen arrived at Shanghai on Christmas Eve 1911, on the foundation of the Republic of China; Shanghai was the site of the First National Congress ➚ of the Chinese Communist Party in 1921. An influx of Russians fleeing Communist rule after the Russian revolution in 1917 added to the racial mix. The world famous Bund ➚ (外滩 Wài tān in Chinese) along the waterfront was established at that time. Shanghai then attracted a vibrant cosmopolitan culture and was called the ‘Paris of the East’. However most of the local Chinese had little money or influence, they provided cheap labor for the foreigners; only a few locals managed to make a good living as middlemen. It became to subject to periods of industrial unrest and rebellion. The ‘May 30th Incident’ of 1925 commemorates the death of 11 people at a demonstration over the death of a worker ➚ at a Japanese textile factory. The May 30th Movement was founded and a national strike disrupted all Chinese trade.

In 1927 the Nationalist Chiang Kaishek exterminated many of his former Communists allies in Shanghai using his connections with gang leaders by unleashing his White Terror campaign ➚. Many Jews fled to Shanghai in the 1930s to escape Nazi Germany. The famous Spielberg film Empire of the Sun ➚ based on the book by J.G. Ballard gives an insight into life of the foreigners in Shanghai when the Japanese invaded Shanghai in 1937. By 1940 there were twice as many Japanese as British in the city. Following the Communist victory in 1949 Shanghai was pilloried as the epitome of decadent capitalism that exploited workers and it was not until the late 1990s that development really took off. This was helped by President Jiang Zemin and Premier Zhu Rongji's association with Shanghai. The city is known colloquially as the ‘Head of the Dragon’ to reflect its leading role in China's recent economic development.

Shanghai can be very hot and humid in summer; spring and autumn are the best times to visit. As well as Mandarin, the local dialect Shanghainese (a form of the Wu language) is widely spoken. The city is one of the main centers for financial services, as well as car and computer production. It is built on very low lying land and is considered one of the most vulnerable cities in the world to a rise of sea level .

Shanghai as a Treaty port

The first British contact was in 1756 when Frederick Pigou a director of the British East India Company ➚ suggested that Shanghai was a suitable site for development. Shanghai was at this time a small fishing town with a population of about 50,000. With hostility to the British at Guangzhou (Canton WG) over the Opium Wars, Britain saw Shanghai as an alternative port she could develop as she wished. It offered good harbor and control of the Yangzi River. The Bund was the first area to be develped by the British, to offer protection from frequent flooding in the area an embankment or 'bund' was built for safe anchorage. It was made a treaty port under the terms of the Treaty of Nanjing 1842. In 1843 British Captain Balfour ➚ was sent to Shanghai to inaugurate settlement. By the end of 1843 there were only 23 foreign residents and their families. Agricultural land at Shanghai was bought from the local Chinese to build residences. Initially the international settlement was under British military protection.

China was exploited by foreign powers from the end of the Qing dynasty to the foundation of the PRC in 1949. The establishment of foreign enclaves within most Chinese cities one hundred years ago led to many frictions with the foreign powers, particularly Britain. The treaty port system forcibly opened up cities to foreign trade in late Qing dynasty China. Read more…

When southern China was in the grip of the Taiping Rebellion (1850-64) the foreign concessions in Shanghai were left alone at first for fear of antagonizing the British. General Charles Gordon helped keep the port open for trade. The Chinese city within Shanghai was taken by the rebels from 7th Sept.1853 until 17th Feb 1855 and many Chinese moved to the foreign concessions to escape them. During this time (11th July 1854) a joint agreement by foreign powers: Britain; United States and France set up the ‘Shanghai Municipality’ to give the city independence from foreign government interference and so solve the issues of rivalry between foreign countries. It provided a sound legal framework for trade and ownership. It also allowed joint co-operation in the defense of Shanghai against the rebels. Anyone coming to Shanghai was free to try to make a living subject to Shanghai's not China's laws. In 1863 the British and American concessions at Shanghai merged to form the autonomous ‘International concession’. The resulting environment made it so harmonious a city that it was termed a ‘Model Settlement’. In 1865 the population had increased to 5,589 foreigners with 146,051 Chinese. Of the foreigners 78% British; 8% American. At this time the foreign settlers became more permanent (not just one or two year stint) and some knowledge of Chinese language and customs became more widespread.

By 1920, when Shanghai was a major cosmopolitan center, the population of the Shanghai French and International settlement combined had reached 60,000 foreigners with 300,000 Chinese; the wider Shanghai city including land outside the concessions had reached 3,000,000. Shanghai had become the third largest financial center in the world. Jardine & Matheson ➚ was one of the largest businesses and it was engaged in the opium trade. The Chinese were given only a small representation on the Shanghai Municipal council. Shanghai's rapid rise came to an abrupt end on 8th December 1941 when it was invaded by Japanese troops. The foreign powers agreed not to seek to renew treaty rights after the defeat of Japan at the end of World War 2 and it came back under Chinese government control.

The University is one of the oldest academic institutions in China. Its early reputation was for producing high caliber engineers and scientists but now covers all major disciplines. It is also known by the acronym SJTU or Jiao Da.. Undergraduates: 16802, Postgraduates: 24495, International students: 1598, GP World ranking 70

One of several Universities located in Shanghai, Shanghai University was founded in 1922 but then re-constituted in 1994 with parts of other institutions. It has a large undergraduate intake and covers all the main academic subjects.. Undergraduates: 26000, Postgraduates: 8000, International students: 3000, GP World ranking 415

The third of Shanghai's great universities, Tongji, was founded over a hundred years ago by the German government. It has a high reputation in engineering and architecture and retains a specialism in the German language.. Undergraduates: 21370, Postgraduates: 17385, International students: 1829, GP World ranking 345

The Song dynasty is considered a highpoint in Chinese cultural sophistication. Great strides were taken in the creative arts and literature. Prosperity from the growing trade by sea rather than overland fueled the building of large southern cities. The eventual conquest by the Mongol hordes brought the dynasty to a tragic close.

Read all about Beijing the historic and bustling capital city of China. Our description includes a detailed map of the central area and travel guides to all the important attractions: Forbidden City; Summer Palace; Temple of Heaven; Beihai Park; Ming Tombs and Tiananmen Square.
Please wait...
Downloading information about character