China has a strong historical tradition in music even though she has now embraced the modern ‘Western’ style of music too. These days you can hear a very diverse range of music in China. The character for 'music' 乐 yuè is written the same as lè ‘happy’, surely demonstrating a harmonious connection. 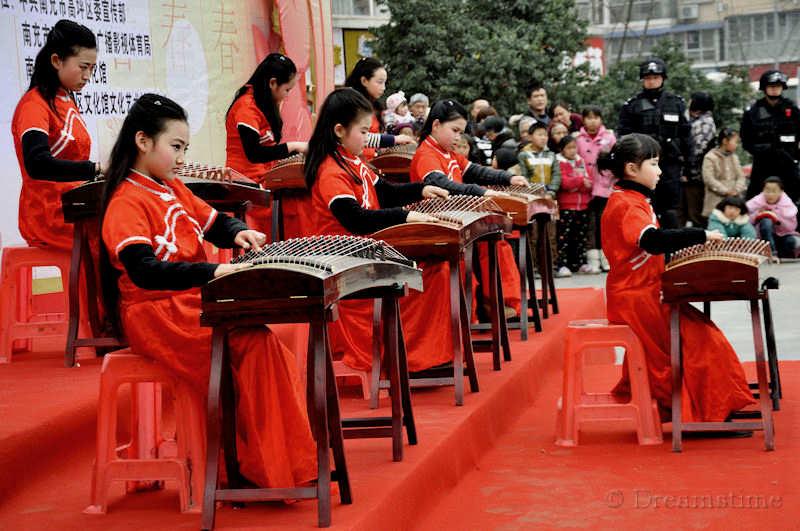 Traditionally the Chinese musical instruments are placed into categories based on the material they are made from: 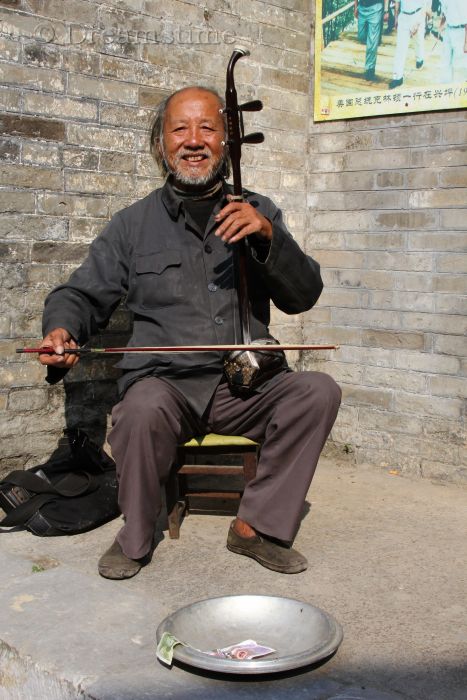 Includes the Bianqing which is a set of ‘L’ shaped stones suspended from a stand and hit with a hammer. They are traditionally made from jade. They date back as far as 1500BCE (Shang dynasty). The musical stone (磬 qìng) is used in a painting to represent steadfastness.

Wind instruments were traditionally made from bamboo. They include: . Dizi (flute, side blown); Xiao (flute, end blown, five holes in upper section one in lower); Xun; Sheng (mouth organ with 13 or 17 small pipes).

The Suona a type of trumpet is usually made from wood. The Guan has a double reed and has 8 or 9 holes. Percussion instruments are often made from wood. They play an important part in the accompaniment of Chinese Opera – including wooden blocks, clappers, and wooden xylophones.

Skin is traditionally used to cover drums. The ancient forms were made of earthenware with animal skin; there is also a narrow, long drum made of a bamboo tube with a snakeskin sounding surface sometimes called a fish drum. Great drums (gu) have been used for signaling and time keeping for thousands of years. Xian has a famous drum tower that announced sunset each day.

The Sheng (mouth organ) has a body made out of a gourd with bamboo pipes affixed to provide different notes. Some have as many as seventeen bamboo tubes inserted into a gourd. Legend has it that the goddess Nüwa invented it and it symbolizes the phoenix and was played at many formal occasions. The sounds are produced just as much while sucking in air as while blowing.

The Ocarina dates back to the Shang dynasty and is a small egg shaped instrument with six holes. 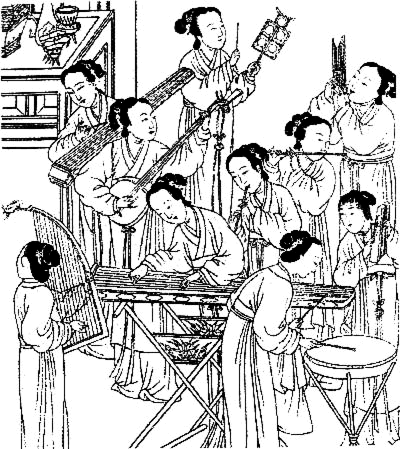 To appreciate Chinese music it is best to hear and see it being played, so here are a number of videos of musical performances of solo instruments and ensembles.

Video not visible
YouTube video of an erhu player

The Pipa came to China from Central Asia at about the time of the Han dynasty.

Video not visible
YouTube video of a pipa player

Quintessence of the Nation

Traditional Chinese Opera was the entertainment of all Chinese over many centuries. A long evening performance contains elements of drama, music, comedy, acrobatics and martial arts. Each region has its own distinctive form. Over time complex body movements represent specific meanings as a very sparse set is used. The art form has inspired many Western composers and playwrights to emulate the style. Read more…

Video not visible
YouTube video of a dizi player

Video not visible
YouTube video of a guqin player

Video not visible
YouTube video of a Korean yangqin player

Video not visible
YouTube video of a sheng player

Video not visible
YouTube video of a bianzhong performance

Blossoms on a Moonlit River in Spring 春江花月夜

A range of Traditional Chinese instruments played together

Video not visible
YouTube video of a traditional music ensemble
How well do you know China?
The famous poet Du Fu had a thatched house that can still be seen where?

The great Tang dynasty poet Du Fu lived in the thatched house (759-763) close to the Nan River at Chengdu, Sichuan. He built the house himself.
Go to our quizzes page for a great range of quizzes about everything Chinese

Music is documented as far back as the Zhou dynasty and forms an important thread in the Confucian tradition. Musical harmony was believed to bring harmony to life. Confucius said he could predict a kingdom's problems from the music played at court. He disapproved of 'immoral' dance music and thought that the noisier the music was, the more likely that the state was in jeopardy. Music was more than mere background entertainment it set the whole mood and character of thought. Chinese music was an harmonious emanation tied up with the concept of ‘qi’ the all pervading life-essence. In the tomb of the Marquis Yi of Zeng ➚ dating to about 430BCE 124 musical instruments of all types and sizes were found.

Chinese bells have survived from the days of the early dynasties, arranged in a series of twelve notes 十二律, the bells were struck with a rod. The notes do not form a scale - a scale is built by choosing notes from the range of bells. The tuning of notes followed a different approach to the Western octave. The octave attempts to divide a doubling of frequency evenly with notes. The old Chinese method did not use an octave instead notes were progressively tuned relative to existing ones. Notes were tuned to a frequency 2/3 and 3/4 of the current note, so the whole sequence of notes were in harmonious relation to each other. This method avoids the problems of tuning in octaves known as temperament ➚. However it was Zhu Zaiyu ➚ who discovered equal temperament in 1584 before that in Europe but it was not then taken up. The Legendary Yellow Bell ➚ 黄钟 huáng zhōng is associated with the Yellow Emperor whose minister developed the perfect flute nine Chinese inches long.

Drums have played a very important in ceremonial occasions for centuries. They were used to announce the start of a battle and are still used at all kinds of festive occasions. It marked the pulse of daily life as the great drum housed in the town's central Drum Tower announced the start and end of day. 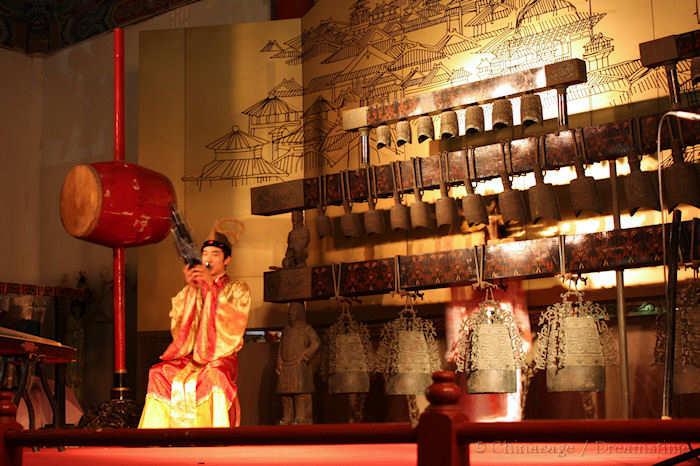 A musician playing a sheng in front of an array of ancient Chinese bells
独木不成林,单弦不成音
Dú mù bù chéng lín, dān xián bù chéng yīn
A single tree does not make a forest; a single string can not make music
Many things require people to work together to achieve an end
All pull together
Fri 21st Feb

We've updated one or our earliest written pages to provide much more information about that great treasure of China - jade. We cover the Imperial jewel the Heshibi and have found some fine illustrations of jade objects that people have kindly uploaded for use on web sites.

After the Zhou dynasty the five note (pentatonic) scale was adopted. It consists of five tones associated with the five elements and is mentioned in Zhou dynasty records. The five notes are C;D;E;G and A in Western notation. A seven note scale was also used with the notes of C;D;E;F;G;A and B. Each dynasty was associated with one of the five elements so the court music changed to use the appropriate key note. Five different modes were used with notes in different orders: gong, shang, jiao, zhi and yu. However the combination of the twelve notes series with the five modes gives sixty distinct tones .

By the Han dynasty the imperial court had employed scholars to collect and record tunes and folk songs all over China. Central Asian music came into China during the Sui dynasty and became widely popular in the following Tang dynasty; it displaced traditional Chinese music for a while. During the Tang, groups of musicians began to perform as an orchestra and the Gongche ➚ Chinese musical notation was devised to write down the score - as just a list of the twelve basic tones without duration. Music for the guqin is known from 3,000 ancient scores and these are probably the world's oldest recorded instrumental music. A scholar-official was expected to be proficient with a musical instrument, in particular the guqin. Scholars would meet in the evening and spend the time reciting poems; playing music and writing calligraphy. The splendor of Tang music was exported to Japan, and the tradition has survived virtually unchanged there.

In Suzhou there is a strong tradition of 弹词 Tán cí where a story-teller accompanies him or herself with a musical instrument (typically a pipa or sanxian).

对牛弹琴
Duì niú tán qín
To play a lute to a cow
Wasting your time on pointless efforts. The 'lute' in this case is the qin, a traditional musical instrument. To address an inappropriate and unappreciative audience. A story from the Han dynasty when Mouzi Lihuolun, a Confucian scholar, who failed to describe Buddhist teaching because his audience had no basic understanding of it
Pearls before swine

Traditional Chinese music came back into popularity during the Cultural Revolution when 'Western music' particularly orchestral music was denigrated and forbidden. The step had a large touch of hypocrisy because at the same time many other ancient Chinese customs and traditions were suppressed. However since Deng Xiaoping's reforms in the 1980s, music from all corners of the world has been accepted and welcomed in China.