In our introduction to the Chinese language section we explained the use of tones in mandarin and provided the building blocks so basic sentences could be read and understood. Lesson 2 builds on that knowledge with some commonly used phrases. 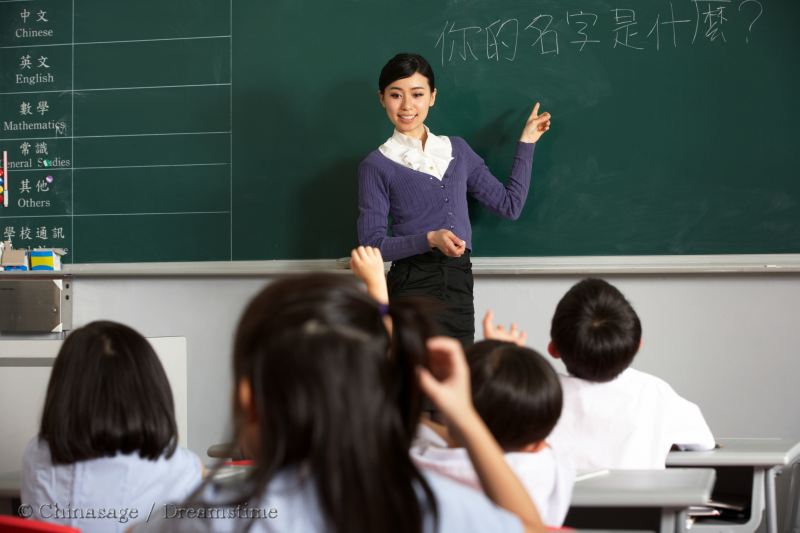 Teaching Chinese. Traditional characters for 'what is your name'

All the Chinese words that are mentioned are either introduced in this lesson or elsewhere in the language section.

Getting by in China

There are many customs and traditions that you should know before traveling to China. Our customs page covers such things as giving gifts, banquets, sealing business deals and how to behave in public. A respect for age old traditions will impress your hosts who will appreciate your efforts to embrace the culture. Learning about 'face', 'guanxi' and general etiquette will make everyone feel more relaxed. Read more…

The Chinese are a polite people and will thank you if helped in any way. As well as ni hao to say hello you will often hear the word huanying as welcome; it means hearty greeting. The word please is not quite as widely used as it is in English and reserved for a relatively large favor. It is usually put first in a sentence and often in conjunction with wen if asking a question.

The easiest and universal way to express gratitude is with thank you xie xie. This is an example where repeating a character softens its meaning making it less formal. If you thank someone or they thank you there is a phrase that is often used as a reply to thank you it is mei guan xi; it can be translated as no problem but more accurately means no consequence. You can also say bu xie which also means no need to thank / you're welcome it does not mean no thanks. When you want to say farewell; say zai jian it literally means see you again. If you are pleased or happy then gao xing is a useful word to include.

what 什么 shén me

When addressing people there are conventions regarding names and titles that need to be followed. The first and most important rule is that the order of names is family name followed by given name rather than the other way around. So Xi Jinping is Mr. Xi with given name Jinping. There are only a few family names in use in China, indeed China is sometimes known as the ‘hundred names’, there are tens of millions of people with the same family name. It is therefore important to use the given name as well as the family name. Only close family members and friends are greeted with just their given name. On meeting someone for the first time, formal titles are used: Mr. xian sheng; Miss xiao jie and Mrs. tai tai.

In conversation it’s usual to acknowledge a person’s relative age, this is done by putting old or young before the name. Xiao is used for young people (under 35) and lao for older people (ten years older than yourself or over 40). These are used after first getting acquainted.

In Mao’s China everyone as known as tong zhi comrade it literally means same purpose. The term has faded from use. You may still hear it as an announcement to a group of people in the plural form: 同志们 tóng zhì mén but it is now also used as a slang term for a homosexual.

It is useful to know the word for friend peng you, a common word for a child is xiao peng you ‘little friend’.

To ask someone their name you can say:

What is your name?. In response you say 我叫 wǒ jiào followed by your name. 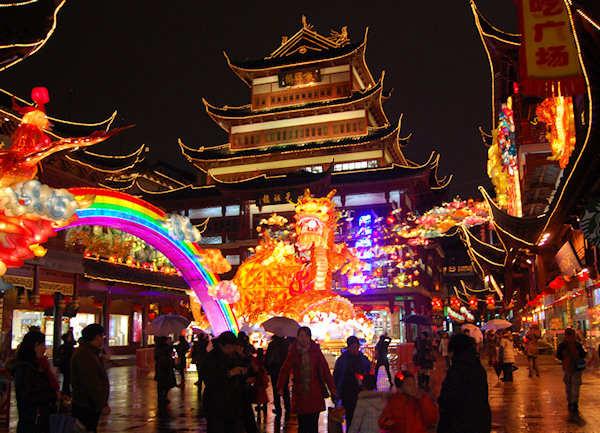 If you want to go beyond speaking and writing 'tourist Chinese' you need a good grounding in Chinese grammar. This Routledge guide goes far beyond memorizing useful phrases and serves as an essential course if you want to speak Chinese well and understand Chinese text. All the Chinese is in both pinyin and characters. It does not include a dictionary section so you will need a dictionary in conjunction with the book.
Amazon details... ➚

We have been careful to avoid introducing too many things at once. Although we have used the pinyin tone marks above the vowels we have not formally introduced them (Our language introduction does have a section on the pinyin tones but they are so important that they are listed again here). In Chinese getting the vowel tones correct is just as important as getting consonants right, they are a part of the language not an optional extra. The vowel sounds can be any of the these five tones, using the wrong tone gives the wrong word.

With the character yǒu - friend we have a clash with yǒu - have and these two characters share the same third tone so you can only distinguish them by their context. These are examples of homophones, all languages have them, in English write, rite, wright and right are pronounced the same but written differently just like 友 yǒu and 有 yǒu in Chinese.

We have already mentioned use of 什么 shén me; it is almost impossible to converse without using words like this and that and other indefinite relations.

However zhè can be pronounced as zhèi and nà as nèi just to complicate matters a little.

The use of 儿 ér is a feature of spoken Chinese. On its own it means child usually son but it is also put at the end of a number of words to give it an 'r' ending. This is a feature of the dialect in the Beijing area . To avoid confusion nar is usually used with another character zai which on its own means located; at and together also means where.

The suffix 儿 ér is also used to modify this into here.

As well as asking where; you also need to ask people who they are. Shei can also be pronounced as shuí - it is less formal than shéi.

To complete the set, the usual way to ask when is to say what time? which is:

Here we list all China's main airports, giving information on location, facilities and easy to use distance calculator so you can plan a complex itinerary around China. We also give useful visitor information about air transport in China. Read more…

We have a separate showing how to say the date and time using Chinese numbers which are one of the first things to learn in Chinese.

Essential in spoken Chinese are the words for yesterday, tomorrow, next week and so on. As Chinese does not use tenses of verb you need to indicate past; present; future in other ways. The easiest method is to put a ‘time phrase’ at the start of the sentence, the tense of a verb following it will then be understood correctly. 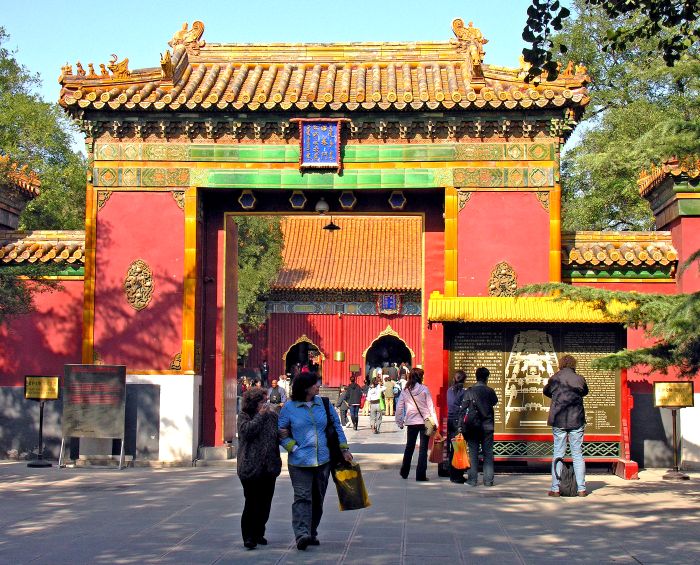 Entrance through the Gate of Peace at the Lama Temple Beijing (Yonghegong), or Palace of Peace and Harmony Lama Temple or Yonghegong Lamsery, a renowned lama temple of the Yellow Hat Sect of Lamaism. Building work on the YongHeGong Temple started in 1694 during the Qing Dynasty. It originally served as an official residence for court eunuchs. It was then converted into the court of Prince Yong Zheng (Yin Zhen), a son of emperor KangXi. After YongZheng's ascension to the throne in 1722, half of the building was converted into a lamasery, a monastery for monks of Tibetan Buddhism, while the other half remained an imperial palace. November 2006. Image by Dennis Jarvis ➚ from Halifax, Canada available under a Creative Commons license ➚

To make our examples a little more varied here are some more common Chinese words that are very useful.

The word for weather is made out of the characters for heaven and air.

Deng is a useful word to know when traveling it is often prefixed with please : qing deng

Here are some phrases and sentences using the words introduced in this lesson.

Waiter. Asks a waiter to come over to serve you.

Hello Mr. Lin. Greeting for someone old or older than yourself with family name Lin.

I am delighted to be in China. Like many sentences there is no need for the English ‘am’, it is inferred from its context.

Where has he gone?. The past tense gone is split by the term where, this is an example of a difficult direct transliteration.

The weather is good today. There is no need for a verb in this phrase, ‘is’ is implied.

What time is it?. A useful phrase to ask the time.

This is my ticket. Use of this and that is essential for statements and questions.

Who has left?. Who is just put in place of a person. The same pattern is used in English.

See you tomorrow. We came across jian in the word for goodbye zai jian again see.

Which day do you leave?. Using which/that automatically turns the sentence into a question.

They are going to America next year. In Chinese, the time phrase has to be put before the verb, in English it would be put at the end.

We have still just scratched the surface as far as learning Chinese, we hope these two lessons have shown that Chinese is not as difficult as it is often described. Try out our Lesson 3, or take a look at our pages on poetry; writing Chinese; Numbers; language classics and giving the date and time.

The Chinese numbers are easier than in many other languages. In our complete guide to the numbers we include many of the traditions associated them. For instance, do you know why 4 is unlucky but 8 lucky?