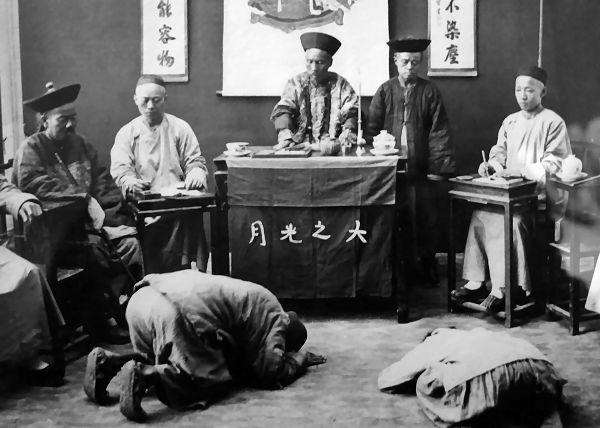 Kowtowing before the magistrate. Official session at a Chinese Yamen, Guangzhou, pre-1889. Image available under a Creative Commons license ➚

The kowtow is the ancient Chinese way of showing respect, reverence and gratitude. ‘Kowtow’ is the Cantonese spelling for pinyin kòutóu 叩头 which means literally ‘knock head’. The full kowtow comprises three kneelings and nine knockings of the forehead on the ground. Nine is a ‘yang’ number associated with the Emperor. Some held that a proper kowtow requires the sound of the skull hitting the ground to be heard.

There was a hierarchy of eight grades of showing respect:

Kiwi fruits originate from Southern China when they were known as Chinese Gooseberries (猕猴桃 mí hóu táo). New Zealanders finding they grew well in their country marketed them as 'kiwis' and now they are associated more with New Zealand than China.
Read more…

Following the Confucian tradition set out strict rules as to which procedure was appropriate and when – it demonstrated thanks rather than a greeting. Note that because Chinese people, up until recent times, sat down in a kneeling position rather than on a chair the act of kneeling is not as unusual as it is in the West.

The Chinese Emperor as the ‘Son of Heaven’ performed a kowtow to the heavens from as early as the Zhou dynasty onwards. The Emperor would also kowtow at Confucius's ancestral shrine at Qufu (first documented in 1008CE) confirming the importance of Confucius to the Imperial system. Unless a senior person indicated otherwise the correct sign of respect was compulsory. If they allowed someone to forgo the salute they would say : 不用行礼 bù yòng xíng lǐ “no need to salute”.

The institution of Emperor, as head of the Chinese family of people, lasted for thousands of years and to some extent lives on with the Presidency. In China there has been great respect for the Emperor/President who in turn is expected to rule wisely with the best interests of his subjects in mind. To early European visitors to China the structure was considered close to the ideal form of society. Read more…

The ambassadors of foreign and tributary states showed their acceptance of China's preeminence by performing a kowtow to the Emperor. For 250 years (up until 1896) Korean kings performed the kowtow to the Chinese Emperor.

In true Confucian manner the Emperor's obeisance to Heaven trickled down the hierarchy of ordinary relationships. People kowtowed at courts of law to the magistrate and to the Emperor, it was a formal recognition of respect. The Emperor himself would kowtow to his mother or other dowager Empresses, as reverence to the older generations beat any other consideration. At a marriage couples would kowtow to their parents; schoolchildren would perform the full kowtow to Confucius twice a month and the ‘sankou’ to their teachers. Abbots of monasteries kowtowed to Buddha; graduates kowtowed to their professors. On the foundation of the Republic schoolchildren would instead kowtow to a portrait of Sun Yatsen chanting the words of his will every Monday morning. The tradition was mainly abolished under the People's Republic, no-one kowtowed to Chairman Mao, and now the custom is reserved for veneration of the ancestors at the family's burial ground.

The kowtow became a major issue for the British ambassador to China, the Earl Macartney ➚ in 1793. Other European ambassadors to China had up until then performed the kowtow without much fuss. The pre-eminence of British military; financial and technological power had been growing, Britain refused to admit that a non-Christian state deserved deference as if England was an inferior. So British protocol insisted that obeisance was restricted to removing a hat and making a respectful bow to the Emperor and not a full kowtow. Heshen ➚ the Emperor Qianlong's favorite reported to him that Macartney had kowtowed when he had only bowed. The embassy continued to ignore protocol despite written instructions and explanations on why it was required. The British position admitted a possible compromise that stated that if the Emperor would kowtow to a portrait of King George III; Lord Macartney would kowtow to the emperor. Because the Chinese tradition was that there was, and could only be, one ‘Son of Heaven’, the compromise was rejected and so the ambassador went no further than going down on one knee. 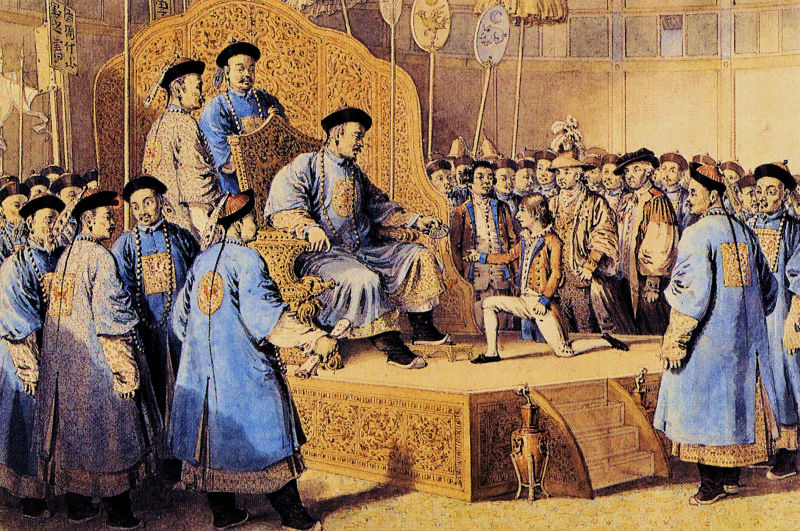 William Alexander's drawing of the reception of the Macartney embassy to China. Young Thomas Staunton ➚ (kneeling not kowtowing) receives a gift from the Emperor. Image by William Alexander available under a Creative Commons License ➚

A Russian mission to China 1805-6 failed on similar grounds. In this case Count Golovkin refused to kowtow to three scented candles that was traditionally used to represent the absent Emperor, he was sent packing with the message ‘You are a daft race. Begone!’.

Lord Amherst led the next British embassy to China and this mission failed completely on the issue of the kowtow. When he arrived on August 29th 1816 he was ordered to immediately go before the Emperor even before his official dress and diplomatic gifts had been unpacked. The Emperor planned to make up for Lord Macartney's dubious kowtow by insisting that Lord Amherst would perform the full abasement. Lord Amherst refused point blank to obey. To avoid the likely embarrassment of a confrontation before the Emperor the officials made sure any Imperial audience would be impossible. This did not prevent Amherst from making a long and detailed exploration of China ➚, especially the Yangzi River basin leading to the establishment of the British Shanghai settlement soon after. Napoleon was of the view that Amherst should have adopted Chinese customs, just as the Pope insisted that visiting dignitaries should kiss his toe.

These two events proved an obstacle to establishing trading relations with China and prefaced as clearly as any other event the collision of European and Chinese cultures in the Opium Wars. It was during the Opium Wars that Private John Moyse's refusal to kowtow became a cause célèbre. On August 13th 1860 Moyse along with others were captured by the Chinese army and were required to kowtow to a Manchu general. Moyse refused and was beheaded on the spot. Sir Francis Doyle wrote a stirring poem on the incident:

The Private of the Buffs

Yes, honor calls!…with strength like steel
He put the vision by;
Let dusky Indians whine and kneel,
An English lad must die.
And thus, with eyes that would not shrink,
With knee to man unbent,
Unfaltering on its dreadful brink,
To his red grave he went.

Vain mightiest fleets of iron framed,
Vain those all-shattering guns,
Unless proud England keep untamed
The strong heart of her sons;
So let his name through Europe ring,…
A man of mean estate,
Who died, as firm as Sparta’s king,
Because his soul was great.

One of the concessions exacted from China at the end of the Opium Wars was the dropping of the requirement to kowtow in 1873.